HP regularly refreshes its Envy laptop line, outfitting them with the latest processors and graphics, while making some refinements. In a bid to attract more creatives, the company is releasing two new notebooks that offer the choice of an upgraded 4K display, improved processing and graphics hardware, along with a separate wireless mouse that lets you works across multiple screens.

Starting at $1,000, the HP Envy 17 is the pricier of the two newcomers. As the name suggests, it boasts a 17.3-inch screen with a full HD display resolution. Inside is an 11th-gen Intel Core i7 quad-core processor coupled with Intel Iris X graphics, 12GB RAM and 512GB internal storage.

The laptop has a clamshell design (the reversible hinges have been reserved for its smaller sibling), slim bezels, and an 86.3 percent screen-to-body ratio. If you’re after something beefier, you can upgrade to 1TB PCIe SSD storage, 32GB memory and a 4K display. 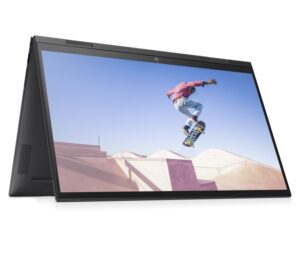 With that in mind, HP is offering a 4K OLED model that should be great for video streaming and gaming. The x360 15 is available with an AMD Ryzen 7 or an 11th Gen Intel Core processor and packs NVIDIA MX450 graphics.

Both the new devices also boast a 19 percent larger touchpad and a new feature dubbed Enhanced Lightning, which essentially turns the display into a built-in selfie light for video calls.

You can pre-order the new Envy devices from the HP store or Best Buy, with shipping beginning in April. Alongside the new laptops, HP is also launching a new HP 930 Creator Wireless Mouse later this spring that works on up to three devices simultaneously via USB-A or Bluetooth dongles.

The $90 mouse comes with seven programmable buttons, a scroll wheel and apparently lasts up to 12 weeks on a single charge.