Jaguar has unveiled a follow-up to its first-ever electric sports car, but just like its predecessor, it’s a virtual vehicle meant for the Gran Turismo universe. The Jaguar Vision Gran Turismo SV is an endurance racer that retains the silhouette of the Gran Turismo Coupé, with changes to make it capable of faster speeds.

MORE FROM RAVZGADGET: Volkswagen Discontinues The ID Buggy To Focus On Mainstream EVs 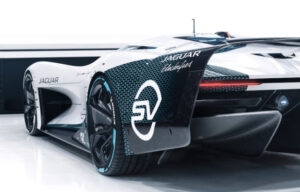 “The Vision GT SV is a dramatic and visually arresting car which showcases what’s possible when the traditional boundaries governing real-world car design are completely removed. In bringing this car to life with a full-size design study we’ve been able to showcase the most extreme version of an electric Jaguar race car that is inspired by the past but looks fearlessly to the future.”

Inside the game, the Vision GT SV will be powered by four electric motors instead of three like its predecessor. Those motors will allow it to generate 1,877 hp, to go from 0 to 60mph in just 1.65 seconds, and to reach a maximum speed of 255mph. The Coupé’s top speed is 200mph.

Vision GT SV’s aerodynamic features will help it achieve those numbers, as well. Jaguar says the most effective aero feature developed for the model is its deployable rear wing, inspired by the brand’s endurance racing cars. The rear wing has two moveable sections that automatically rise to increase downforce for greater traction and drop down to minimize drag.

MORE FROM RAVZGADGET: Tesla Said It Will Stop Model S And X Production For 18 Days

Unfortunately, Jaguar didn’t say which game the virtual endurance racer is for exactly, only that it will be coming in 2021. It could arrive with Gran Turismo 7, which is expected to be released next year for the PS5, but we’ll have to wait for confirmation from the automaker and GT’s developer to be sure.

Stay connected to trending technology news by following @Ravzgadget on Twitter and Like our page on facebook.com/ravzgadget.