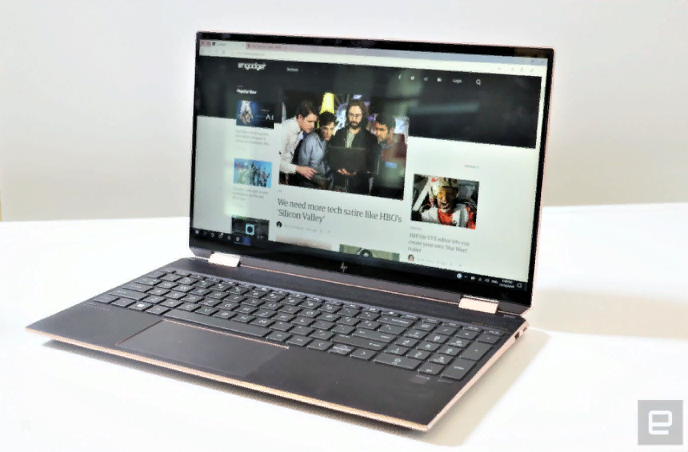 Laptops are getting thinner, lighter and prettier, but lately they’ve been getting bigger, too. Just look at recent devices like the 16-inch MacBook Pro, the Surface Laptop 3 15-inch and the LG Gram 17! After years of largely neglecting 15-inch (and larger) machines, laptop makers are paying attention to them again and we’re about to see more here at CES 2020. HP is kicking things off with an updated version of its Spectre x360 15-inch convertible, which is perhaps the prettiest laptop of its size.

I’ve been a fan of HP’s recent Spectre convertibles since 2016 — they stood out for their attractive color schemes and sleek lines. Last year’s Spectre x360 showcased shiny cut-out corners that housed USB ports for more convenient charging, and came in pleasant dark grey on rose gold hues (or just silver if you prefer). The company first announced the 15-inch x360 at CES last year, then rolled out the 13-inch version in September.

This year, HP seems to be doing the same, showing a new version of just the bigger notebook for the show. Externally, the Spectre x360 has the same shape as before, with the unique cut-off corners. One of the most noticeable changes are the significantly reduced bezels, which allowed the company to reduce the laptop’s size by 13 percent.

It was able to do so by using a much smaller IR webcam above the 15.6-inch OLED panel, which runs at a 4K resolution. With support for something HP calls True Black HDR, the new laptop makes for a much more immersive multimedia machine.

You can also opt for an anti-reflection treatment on the x360 15’s screen, which should make it easier to view under bright light. The coating will also resist fingerprint smudges so you can poke away with dirty fingers and not worry about dirtying up the touchscreen.